THE DOGS OF IRELAND

It’s a known fact that, Irish or not, everyone is Irish on St. Patrick’s Day. And our pups are no exception. This is why I thought doing an article on THE DOGS OF IRELAND for our March newsletter would be interesting and full of Irish doggie facts.

Listed below are the nine native dogs indigenous to the beautiful Emerald Isle. Magnificent Ireland and her beautiful dogs.

All of these were originally bred as working dogs. They also ended up being terrific companion dogs. In the early part of the 20th Century, they became living symbols of Ireland’s Celtic past.

They play a big part in Irish literature and folklore. Not only do these Irish doggies have a strong social intelligence that fosters a close and bonding relationship with their human companions, fitting in beautifully to their household, but they’re man’s best friend in every sense of the word. This human/dog relationship is richly steeped in Irish history and mythology.  For example, the great mythological warrior and celebrated hero of Irish literature, Fionn MacCumhaill, adored his two hunting dogs, Bran and Sceolaing. The dogs are almost as famous as Fionn himself.

Being of Irish descent on both sides, I’m finding amazing facts of interest regarding these beautiful Dogs of Ireland. Although I’ve never been an Irish dog parent, I have friends who are.  And in the sake of educating myself on these diverse breeds, I’m discovering things I’d never known before. These nine native dogs have been developed down through the centuries in the woods, the bogs, and the mountains of Ireland, and are the legacy we have so proudly inherited from our forefathers.  Out of the nine, there are 2 hounds: the Irish Wolfhound and the Kerry Beagle. There are 3 Gundogs: Irish Water Spaniel, the Irish Red Setter, and the Irish Red and White Setter. There are 4 Terriers: Irish Terrier, Irish Glen of Imaal Terrier, Irish Soft Coated Wheaten Terrier, and the Kerry Blue Terrier. A little backstory on each follows: 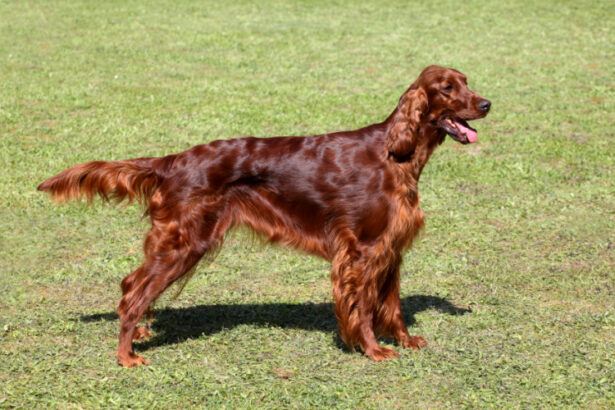 Although green may be the true color of the Irish, the Irish Setter has a color all its own. A deep mahogany or a luscious rich chestnut red are the colors of this four-legged beauty. As a fun-loving breed with rollicking personalities, they require a good amount of exercise in order to satisfy their breed instincts. Although tough and tireless field dogs, they are a loving family dog and great with children. My neighbors, growing up, had one of these beauties who was aptly named, Irish. 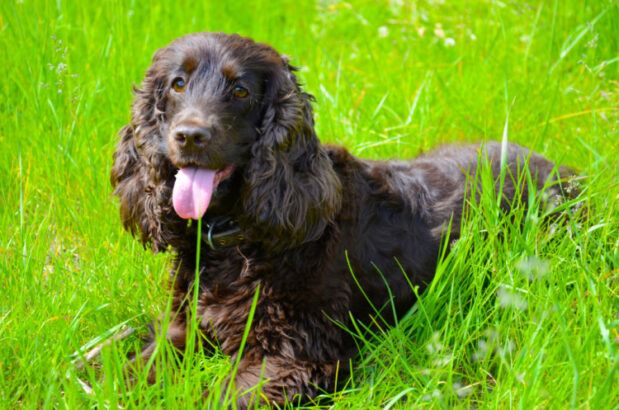 This breed is a natural water dog and the top choice of waterfowl hunters. He’s strong, stout, incredibly smart, and very loyal. He has a long and illustrious history and often thought that this breed originally originated in Persia. The very first Irish reference to “water dogs that fetch waterfowl,” can be traced back to the 1600s. He’s quite often called the “clown” of the spaniels. Perhaps, because of the topknot of long curly hair between its eyes and the often-times comical behavior displayed while working. It presents a tightly curled dense coat, typically a rich liver color with a purple hue, and is sometimes called a “Shannon Spaniel, a Rat-Tail Spaniel, or a Whip-Tail Spaniel.”  Its unique tail points directly to it being indigenous to its Irish ancestry. 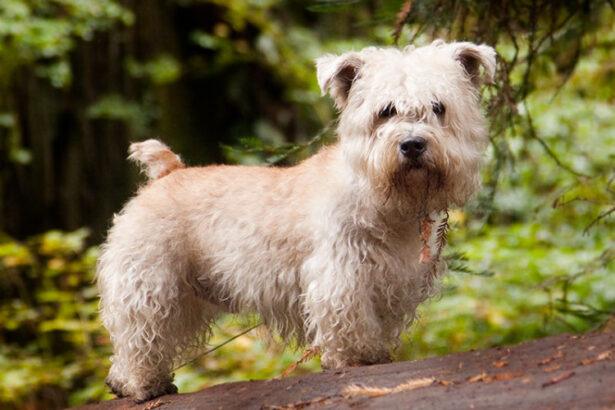 This guy’s origins are obvious. The rugged terrain of the Glen of Imaal in the Wecklow Mountains. Legend has it as a breed whose job description was a turnspit dog.

What is a turnspit dog, you ask? Simply put, it was his job to paddle the large turnspit wheel over the fire. Its powerfully strong back legs and uniquely bowed front legs made him an exceptional candidate for this job. He’s a hardy working dog originally bred to hunt badgers, foxes, and vermin off the farm. Although the smallest of the nine Irish breeds, he has the reputation of being  the “big dog on short legs.” This is due to his length and extremely developed muscles. He may be little, but he’s mighty. Often used as a guard dog who rarely barks, however, when he does, you’d better look out as his voice emits a deeply resonant and extremely intimidating sound.  It’s quite often noted that a Glen will rarely provoke a fight, but if he finds himself in one, he’ll highly likely exit as the only victor.  Yep! Ireland’s Minnie mighty warrior. 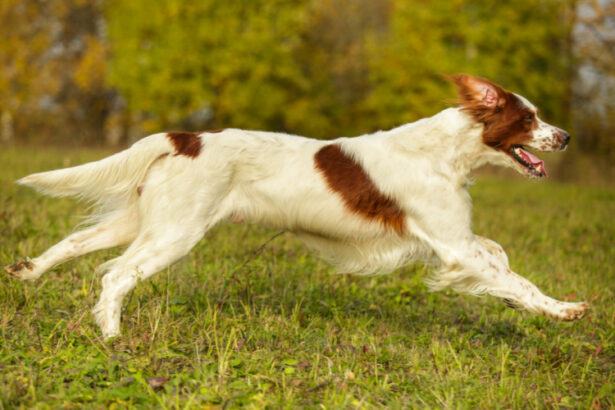 This breed has been thought to have emanated in Ireland near the end of the 17th Century. It nearly became extinct near the end of the 19th Century when the breeding of the pure red variety became more preferred, popular, and fashionable. Thanks to Northern Irish clergyman, Nobel Huston, and his effort during the 1920s, the breed survived. Its popularity has increased, and it has finally reestablished itself in Ireland. It is strongly associated with the Rossmoor family, who maintained the breed for nearly 300 years and were actively involved in its revival during the 20th Century. It’s a sporting dog, a pointer, and a gundog. Its highly intelligent, fiercely loyal, has a great temperament, and is an affectionate family dog. 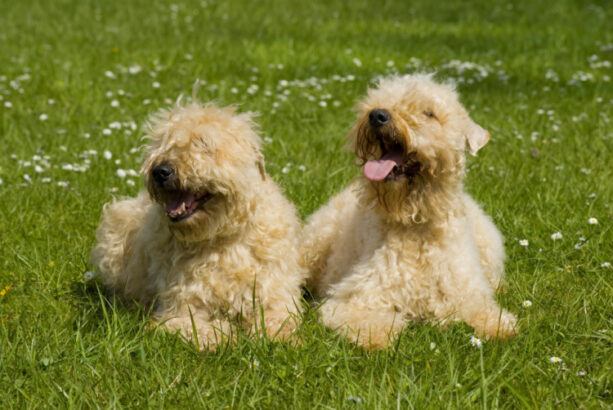 This breed is thought to be deeply rooted in Irish history. However, it has only known to be in Ireland for approximately 200 years. It was widely bred as a farm dog and a loyal companion of the common man. You would be hard-pressed to find members of Nobility owning a terrier. Their preferred dogs of choice would likely be the Irish Wolfhound and various hunting dogs. This breed has many different and unique roles. He’s great at herding livestock, ferreting out vermin on the farmland, and guarding against intruders. But, in today’s society, its mainly kept as a family pet. Just a plain old faithful companion. 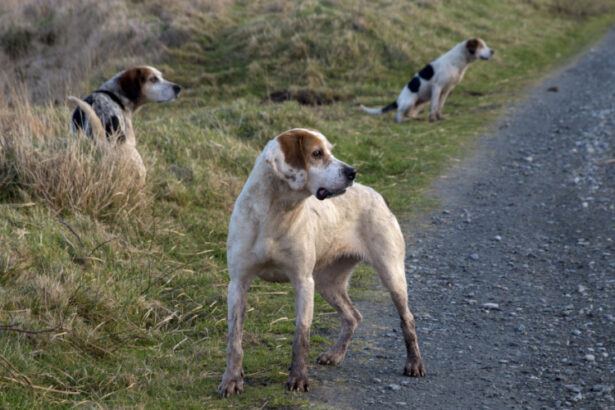 This breed is believed to have descended from the “Old Southern Hound,” or “Celtic Hounds.” It’s one of the oldest hound breeds in Ireland. There is even mention in several Old Irish books of a dog called “Gadhar,” which is thought to be the direct descendant of the Kerry Beagle. He’s not only a good-looking, larger-sized dog, but he’s an intensely effective and spontaneous hunter. They’re still used in packs in Ireland for hunting hare on foot. Although, a popular sport merely for the joy of following the pack and rarely is a hare ever caught. Originally, it was used to hunt stag because of its endurance and speed. 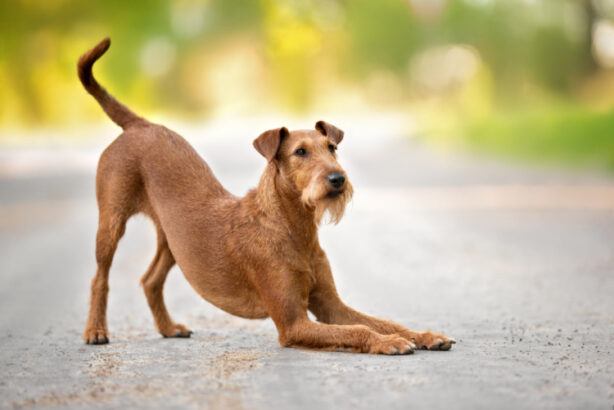 References have been made in books that are centuries old, indicating this breed may be the oldest of the terrier breeds. One of the earliest mentions can be found archived in the Dublin Museum. The author calls the Irish Terrier a “farmer’s friend, a poor man’s sentinel, and the gentleman’s favorite.”

During World War I, it earned a reputation as a brave and loyal breed when used to deliver messages between the troops on the frontlines.  Like the other Irish Terriers, it is a good farm dog as well as for its hunting and working abilities. It’s also brave, loyal, fleet of foot, and has great endurance. 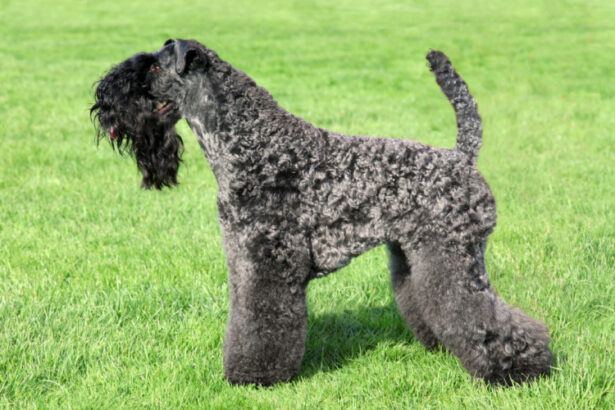 A breed purely born in the mountains for over 100 years. Its origins are in County Kerry. Although it’s believed to have extremely deep roots in Irish history, and its principal role as a companion to the common man, there seem to be very few references to it. It did, however, become a symbol of Ireland’s Celtic past during the early part of the 20th Century. It seemed to have enjoyed a burgeoning revival of sorts through the nationalist cause, due to Irish revolutionary leader Michael Collins and his dog named “Convict 224.” The Kerry Blue is a gentle, friendly, and loyal companion. This medium-sized dog has exceptional hunting skills, originally bred for hunting badger, vermin, birds, and small game. It’s a terrific watchdog and farmers use it to herd their flocks and tackle otter in deep water. A very versatile breed. 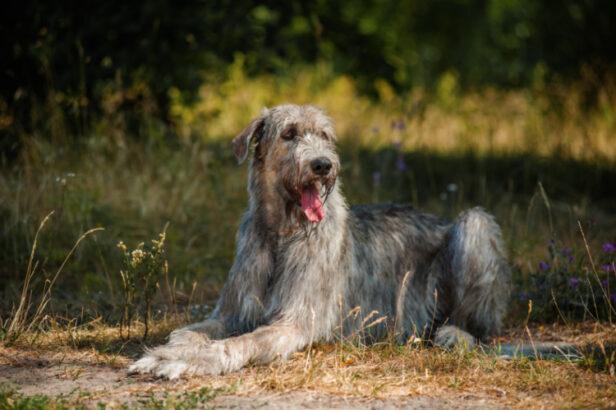 It’s generally accepted to be Ireland’s oldest breed, having been recorded for centuries in both mythology and official records. The first official record of the breed was written in 391AD when mentioned in the Roman Council. However, by First Century AD, they’d already been established in Ireland when mythological Irish hero Setanta earned the name “Ca Chulainn.” Meaning, ‘Hound of Culann,” after killing Culann’s Irish Wolfhound supposedly in self-defense.

Irish Wolfhounds were highly regarded as prized gifts in Royal Houses of Europe from the Middle Ages to the 17th Century. Had it not been for the revival of breeding in the growth in Irish nationalism in the late 19th Century, the breed nearly became extinct.  It’s been regarded as a living symbol of Irish culture and Ireland’s Celtic origins. The Wolfhound’s revival is due as well, to the efforts of British Captain, G. A. Graham, who crossed the Irish Wolfhound with Scottish Deerhound. The Irish Wolfhound is not only the tallest breed in the world, but it’s Ireland’s tallest breed. Males reach 32-34 inches in height. It’s an extremely fast-moving, intelligent, animal that hunts by sight. Its sheer size, long legs, and distinctive broad chest, and muscular body, grant it both a commanding and elegant appearance.

As its name implies, it was used for hunting wolves and deer in Ireland up to the end of the 17th Century. Wolfhounds were also used for hunting wolves in the forests of mainland Europe before the forests were cleared. They’re extremely territorial and make excellent guard dogs.  Our neighbors, when our children were growing up, had one. All the kids in the neighborhood called her their big pony.

Breeds of the Emerald Isle

So there you have it. All nine breeds of the Emerald Isle. I hope you enjoyed the tidbits of information regarding the most prestigious breeds of Ireland’s furry friends. Maybe you happen to be the proud parents of one of these beauties. If so, please share your personal stories and pictures of your precious Irish pups. We’d all enjoy reading about them and seeing your family photos.

Wishing you all a happy and safe St. Patrick’s Day with your family and friends. But most of all, with your precious pups, be they Irish or not. St. Paddy’s Day is a day when we’re all Irish.

Much love and luck of the Irish from, Carroll and Lisa, Big Drummer, and Little Fancy

P.S. Here are some fun ideas for celebrating St. Patrick’s Day with your Fur Baby…

1 thought on “Meet the Dogs of Ireland”