How to Calculate Dog Years to Human Years

Did you know? Since the 1950’s, the popular calculation of how old a dog was in “human years” has always been one dog year is equivalent to seven human years. Even though this formula has been around for a very long time, it’s still not cut-and-dried.

How did this formula come about in the first place? We’re not sure anyone knows definitely, but the best guess is that the 7:1 ratio appears to have been based on how long people lived back in those days. Apparently, 70 years of age was the optimum for humans, while dogs lived to about ten years of age.

There have been many theories. One was that it was a marketing tactic thought up by a veterinarian from Kansas State University, William Fortney. He told the Wall Street Journal that perhaps it was a way to educate the public on the speed with which a dog ages compared to humans. It was a way for people to visit their vet with their pets at least once a year.

However, as a general guideline, the American Veterinary Medical Association, breaks it down like this: 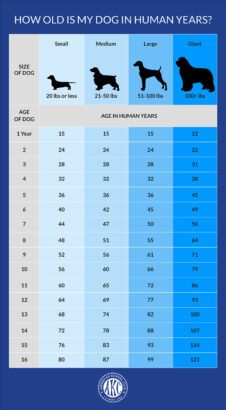 To make it easier to follow, We’ve posted a chart from small breeds to giant breeds.

People have been comparing human-to-dog years for centuries.

As you can see by just two of the age charts, no one formula for dog-to-human age conversion is scientifically agreed upon. However, they do show somewhat close limits and great similarities.

You be the judge.

Do you have any insights on dog-to-human years? Please tell us in the comments below.